Agumbe - Cherrapunji of the south

By Charu - August 16, 2017
Along the western coast of Karnataka runs the region of Malenadu, which covers the western and eastern slopes of the Sahyadris. Agumbe, a small village in Shimoga district, lies right along its spine. Known as the "The Cherrapunji of the South", this region receives one of the highest rainfall in the country.

Having googled about the place, I did expect Agumbe to be engulfed in thick forest, beautiful, wet and raining through out the day. But as it turned out, this  little village had lots more to offer. 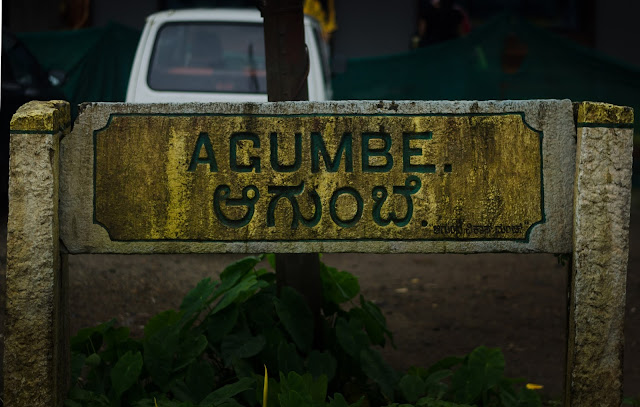 The bus journey from Mangalore took us along narrow Ghat roads through the tropical forest belt. The village doesn't shout out its existence. It stands in humble silence somewhere along Udupi - Shimoga route. Fortunately, I did not miss my destination, thanks to the conductor.
Thanks to the conductor!!. 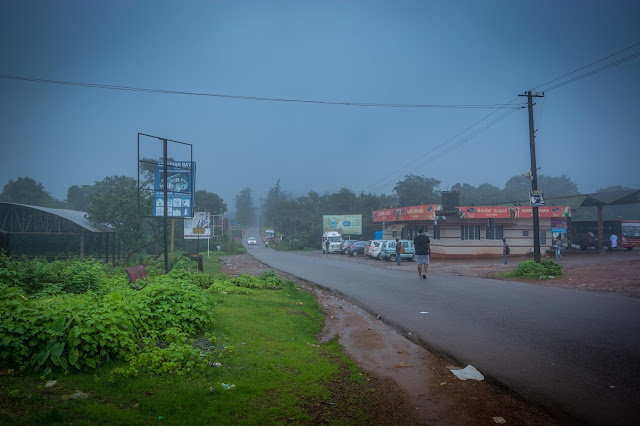 Mallya residency, which is one of the few options for accommodation, is located right adjacent to the bus stand. Post lunch, we had a short stroll along the foggy village roads which are embanked on either sides by thick forests and lush green fields. The never ending rains add to the beauty. 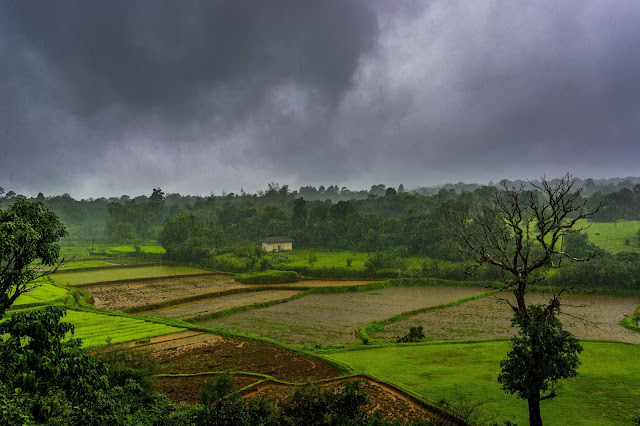 We then decided to visit the Jain temple at Kundadri hill. The place is around 30km from Agumbe, with the last 4-5 km being a steep climb. It is well connected by a narrow tarred road. One could hire a taxi to reach the temple, but I would recommend to walk this path in the heavy rains. The ambience is so calming that one would not feel tired ascending this steep road. 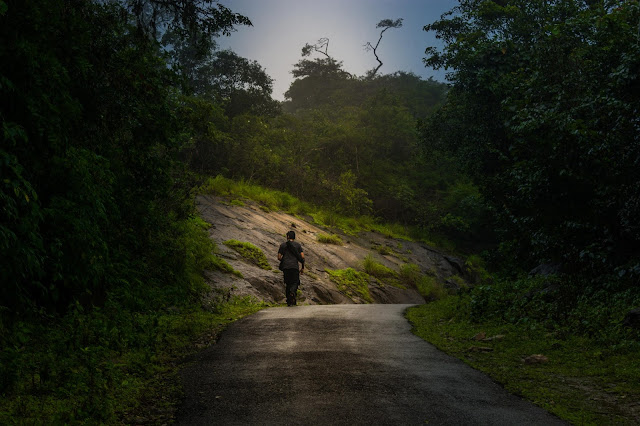 All around, the mist fills up the air. The peaks of the hill surrounding the track hide beneath the mist once in a while! 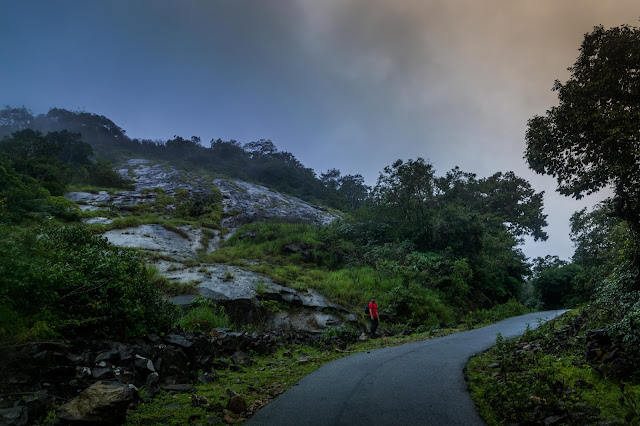 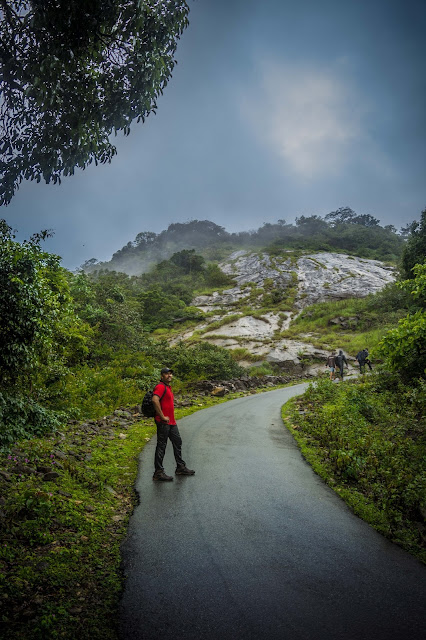 At the top of this hill lies the 17th century Jain temple with an adjoining pond. The walls of the temple have been recently painted for restoration. It is said the stones used to make the temple were cut out of an adjacent rock which has turned into a pond. Although the restoration was a noble idea, I personally, would have preferred the look of a natural rock finish over the painted one.


Between the windy flitting gaps of the fog, one can see the vast expanse downhill, extending to infinity. 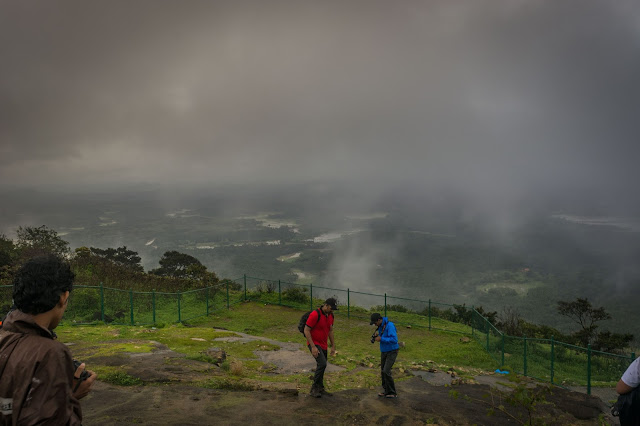 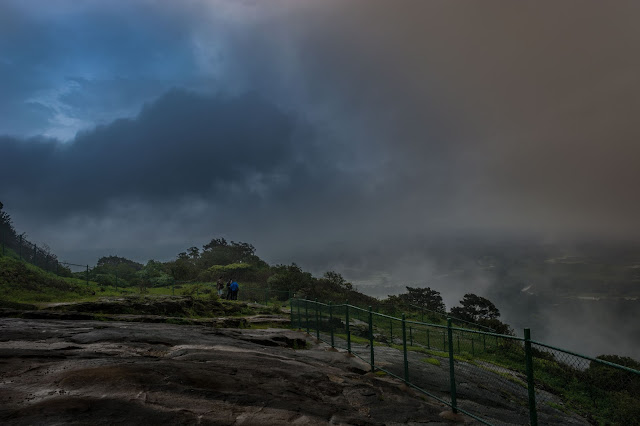 After spending about 2 hours on the top we reached back, had tea and set off to the sunset point which is about a 5 minutes drive from Agumbe. Unfortunately, by the time we reached the point the sun was down. However, the view down the valley in the dim light was still pleasing to the senses. 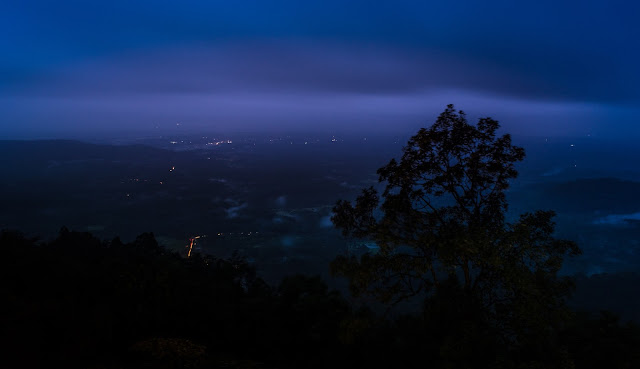 The next day, we had a stroll through the village. It was then we realised that the small village of Agumbe had a lot of history behind it, hiding in the eerie mist which none of net search revealed.

Once a happening and bubbly town during the British era, Agumbe was a transit point for goods shuttling between Mumbai and south Indian cites. Loaded bullock carts were used to traverse the long and treacherous route across the ghats to the north. Agumbe being the summit, was often the choice of shelter for the weary traders. One regularly comes across the remnants of the shelters, known as Sathras, made by the village chiefs scattered in and around the area. The silhouette of these abandoned sathras in the misty morning light, can send a  ghostly chill down the spine of any unexpected stroller.


With the advent of better roads  and the newly constructed railway lines, the eminence of Agumbe gradually faded.  This village now has less than 500 inhabitants with agriculture being the major occupation.

The other pleasant surprise were the numerous ancient monuments and temples of Jainism and Hinduism. The villagers do their best to preserve these symbols of culture and heritage. Though not a fan of historical monuments myself, it was fascinating to see how these pieces of history, (some of them more than 2000 years old!!) have withstood the test of time, despite the unpardoning weather and minimal external assistance. 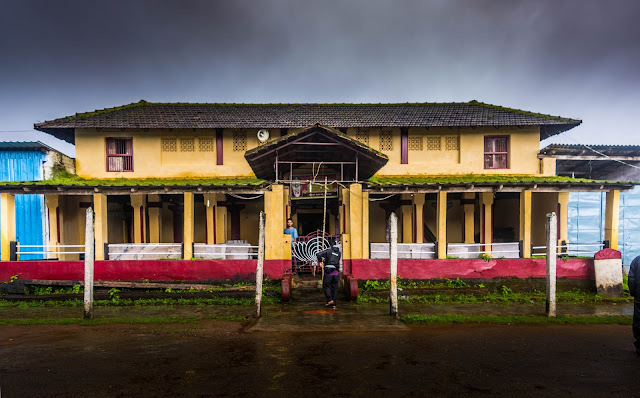 The locals were also keen to show the "doddamane" - literally meaning - the big house, the site of the shooting of the popular series, Malgudy days.

The rain was still lashing down hard. It rains so heavily here that the wall of the houses get damp to the point that they loose their strength and collapse. To overcome this, the residents wrap their houses with tarpaulin. 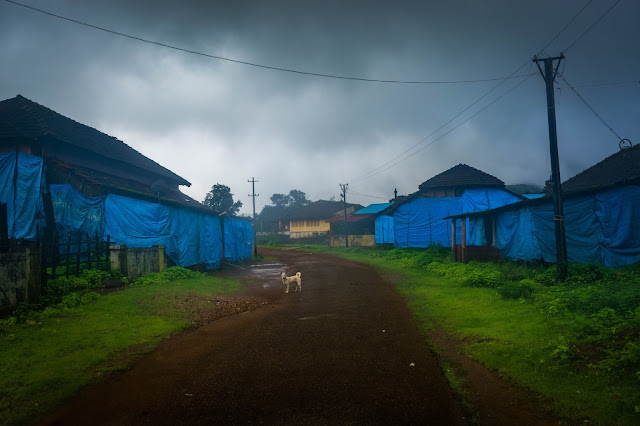 After the enlightening walk, we had breakfast and set out to see what actually this place is really famous for - the forests and the waterfalls.

As most of the water falls were cordoned off by the forest officials and police due to various safety concerns, it was a bit tough to find a safe trek zone. The locals were really helpful in guiding us. As the mark of reverence for their request, I choose not to divulge the identity of this trek zone. But once the restrictions are lifted, anyone can easily travel and explore the area.

The trek took us amidst dense forests, through mud and rain, crossing numerous small streams and finally led us to one of the many alluring waterfalls. 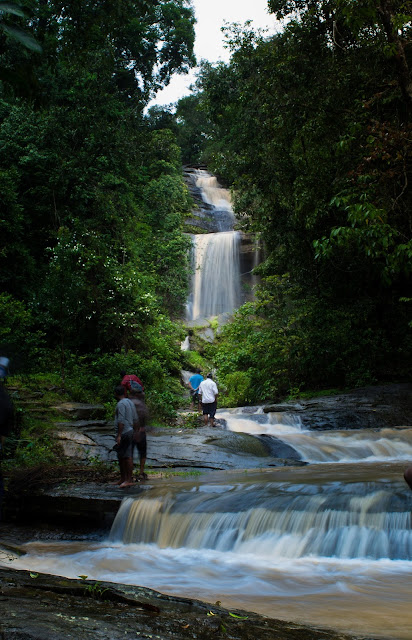 The cliffs over-hanging the falls had long loose roots dangling down its sheer face, which gently guided the water down to offer one a perfect shower. 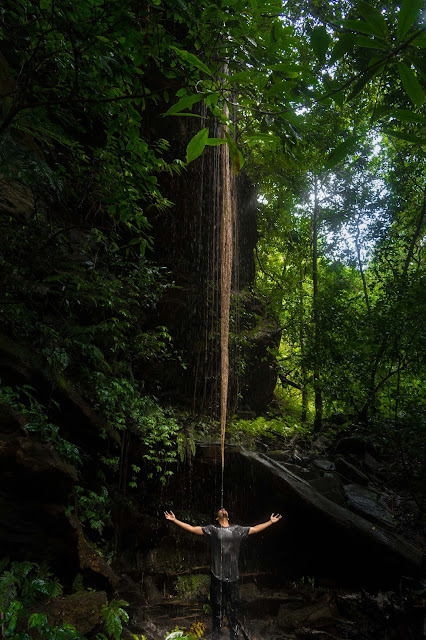 After this we returned to Agumbe and had lunch. We then indulged in another specialty of Agumbe - Mud football. The locals were more than happy to let us join and it was much fun. 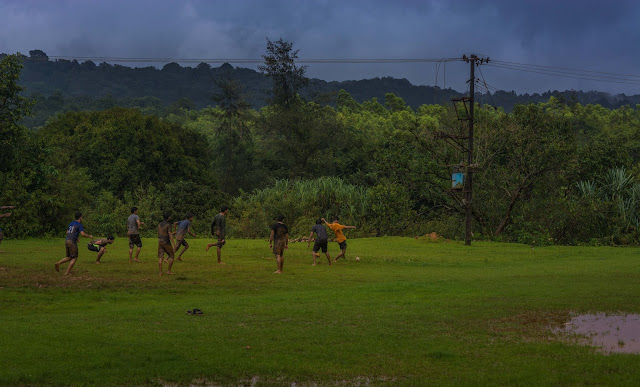 Overall, I wished I had more time to explore this beautiful mysterious land. Maybe once all the restrictions imposed get undone, i would plan my next visit to further explore the  hidden histories and mysteries of Agumbe.

How to reach: Agumbe is about 3 hours drive from Mangalore via road. The Ghat section after Udupi is particularly beautiful. Nearest big railway station is at Udupi, which is about 1.5 hours drive.
Private buses plying to Shimoga are frequently available from both these locations.
Agumbe Malenadu sahyadri
Reactions: Location: Agumbe, Karnataka, India

Popular posts from this blog

To the edge of the world - The Laitlum canyons 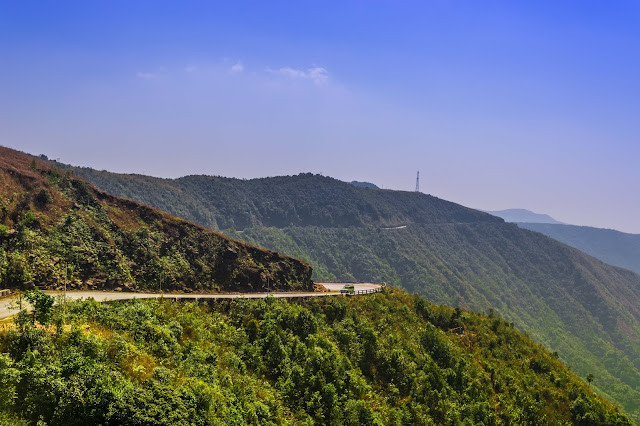 Situated around 30 km from Shillong, lies an exotic secret of the untouched North eastern India - The Laitlum canyons. Unblemished yet, by tourism and commercialization, the pristine Laitlum lends a majestic view down to the valley of the East Khasi hills, overlooking the Raslong hamlet. Surely, a must visit for any travel enthusiast.

Bhutan - The kingdom of happiness 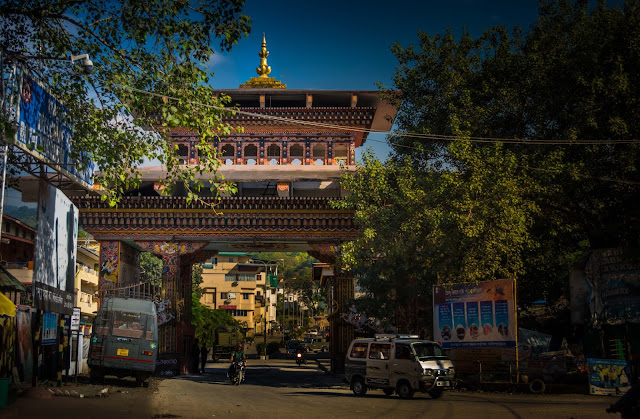 A trip to the land of happiness was always in my bucket-list, awaiting to be put into action. Yes, Bhutan it is! I was in the land of dragons, in the winter of 2017. Exploring the natural paradise was my main agenda, as I am less of a history enthusiast. Little did I know that both were inextricably interwoven into the experience of Bhutan.

So, here I place before you a brief outline of my 10 day trip to this wonderland.
Day 1 : Cross the border to Phuentsholing, get the permits and proceed to Thimpu.

An exciting (but time consuming)  way to do this would be to board the Kanchankanya express (train no. 13149) from Kolkata, Sealdah station (20:30 hrs) ,  and alight at Hashimara (supposed to be 10.40hrs but it took 90 more minutes!).
Hashimara is a quiet station with minimal activity. Plenty of taxis (on reserved or shared basis) will be available for an approximate charge of Rs. 400 to the border, which is about a 40 mins drive. 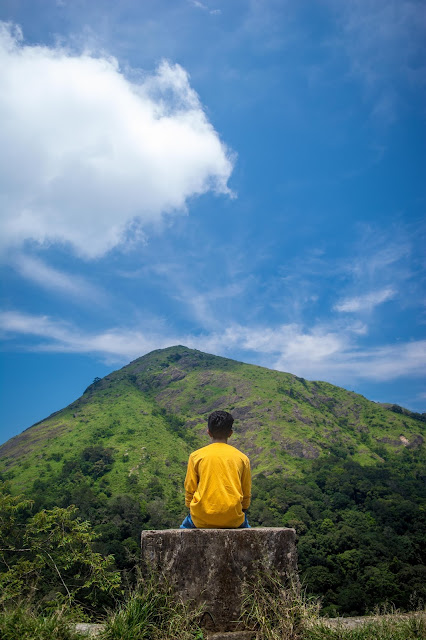 Well.....A much awaited reunion.... after a long two years of rigorous and monotonous work,  there could  be no  better place to meet than the calm, cozy erstwhile coffee and cardamom estates along our very own western Ghats.

Ever heard of Nelliyampathy? ... For those who have not....let me take the pleasure and pride of introducing you to this serene lush green ghats, a relatively untouched part of God's own country, Kerala. Once carpeted with tea, coffee and cardamom plantations, most parts of Neliyampathy are now being taken back by the government after the lease period.

Despite having been to this place more than a couple of times, Nelliyampathy still lures me  with its absolute tranquility. This time, I had an equally amazing company of my old colleagues and we all looked forward to spending a quiet, simple weekend, away from the city hassles.
We commenced our journey from Thrissur (which is approximately a 2 hour drive from Nelliyampathy), the only annoyance being the never-end…
Read more 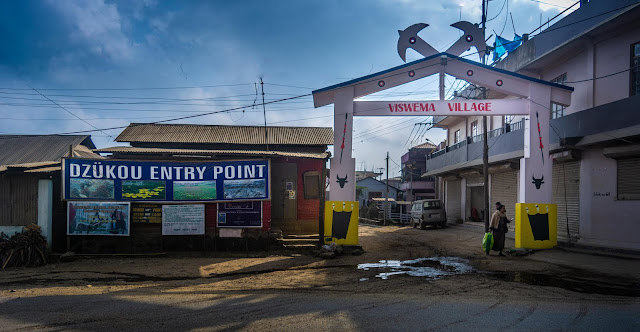 Well.... there is no other way of putting it.... The north-eastern states of India are a paradise on earth for any traveller. The diversity and uniqueness of this region has captivated numerous anthropologists and researchers. Post independence, our leaders intended to safeguard the sanctity of these regions, which meant giving the indigenous tribes the respect and space to practice their ways of life. The place has thus, remained largely untouched by "mordernisation" making it (in my opinion) one of the most beautiful places to visit.
This was my third visit to North-East India, but my first to the land of 'Nagas'. It was the allure of the  Dzükou Valley drawing me!

I will now try to take you through the experience of visiting Dzükou in the next 1000 words or so.


The gateway to Nagaland is the small but stylish town - Dimapur, reached either by air or by rail.  I reached Dimapur on a Tuesday afternoon at around 12 noon by air. For new travelers, in order to travel th…
Read more 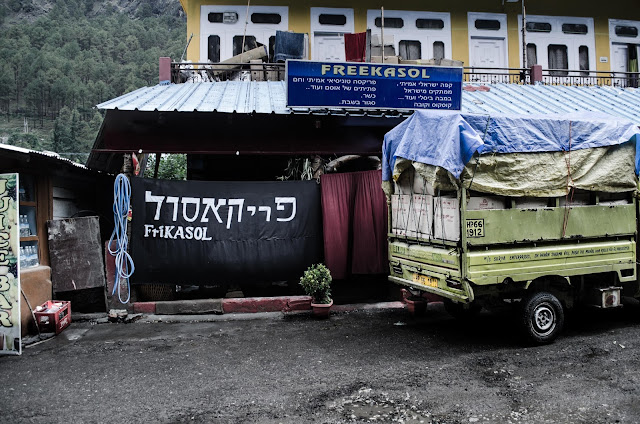 My first trek with Youth Hostel Association of India (YHAI), ‘the Sar Pass Expedition’ was an unforgettable experience. Much spoken about by my travel buddies, Sar Pass trek was something I was keenly looking forward to. Finally, I got the opportunity to do so in the 19th batch of YHAI (SP-19) 2016. I sincerely hope this travelogue will inspire you all to explore unseen wonders; to protect, respect and conserve nature.
‘Sar’ in the local dialect refers to a lake (usually frozen). The lake, which one has to cross to embark on this trek. Sar Pass trail meanders across the Parvathi valley, Kullu district in Himachal Pradesh.

A beautiful and challenging trek to amateurs.
The trek was to commence from Kasol (6500 ft ASL). I arrived at Kasol by bus at around 1400 hrs. The base camp was at the entrance of the town, along the banks of the  Parvathi river (to the left of the road as you come from Bhunter). It was quite impossible to miss the words YHAI written over the roof. Kasol (in case you d…
Read more